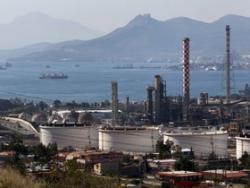 An Iranian deputy minister of petroleum said the country’s petrochemical production capacity will reach 180 million tonnes in next 10 years despite international sanctions imposed on Iran's energy and financial sectors.

Mohammad Hassan Peivandi, Iran's Deputy Minister of Petroleum and Managing Director of the National Petrochemical Company (NPC) was quoted by Iranian media as saying that after provision of necessary financial resources, Iran will increase it petrochemical output to 180 million tons a year, ranking the first among Middle Eastern countries in this regard.

He added that during the next 10 years, the public sector will implement projects to increase petrochemical output by 60 million tons, while the private sector is also expected to supply needed funds to cause a further boost of 60 million tons in the country’s petrochemical production capacity.

“The National Petrochemical Company has been able to garner needed credits for financing petrochemical industry projects and even if international sanctions against Iran are not lifted, these projects will be financed through domestic banks,” Peivandi noted.

Sanctions were imposed on Iran's energy and financial sections at the beginning of 2012 by the US and European Union (EU) claiming that there is a military aspect to Iran's peaceful nuclear program; an allegation Iran categorically rejected.

The Islamic Republic and the G5+1 group of countries – the US, the UK, France, Germany, Russia and China – reached an interim agreement on the Islamic Republic’s nuclear program in the Swiss city of Geneva last November, which led to relative loosening of sanctions against Iran, paving the way for further cooperation in various economic fields between Iran and other countries.

The two sides also reached a mutual understanding on April 2 in the Swiss city of Lausanne, which is considered a prelude to the achievement of a comprehensive deal before a self-designated deadline at the end of June. A key point of Lausanne statement was a promise to lift a series of economic sanctions on Iran – including those on the country’s oil industry.

The official noted that given the possibility of removal of sanctions and the subsequent need to attract new investment in Iran's petrochemical industry, necessary infrastructure for the attraction of foreign investment should be provided.

The official’s remarks came after an NPC official announced earlier in May that Iran is planning to bring three new petrochemical plants on-stream before the end of the current Iranian calendar year (ends March 20, 2016).

Maryam Shahedaei, the official in charge of projects at the National Petrochemical Company said the three plants will be located along the path of the West Ethylene Pipeline in West Azarbaijan, Kordestan and Lorestan provinces.

“When the projects become operational, the country’s production of light and heavy varieties of polyethylene will increase by about 900,000 tons,” Press TV quoted her as saying.