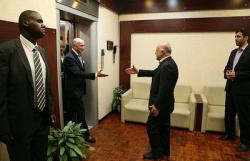 Following four years of gap, a new load of Iran’s petrochemical products was exported to France.

French oil giant Total said on Monday it is ready to provide the loans required for development of Iran’s oil sector projects once the sanctions against the country are lifted.

According to Press TV, Stephane Michel, the president of Total's Middle East-North Africa, told an energy forum in Tehran that Total is also ready to transfer the oil industry technology to Iranian companies.

He further described Iran’s oil and gas reserves as significant, stressing that the country can play an important role in the global energy market.