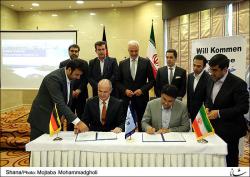 According to the Shana news agency, this contract, which could be expanded up to €10 billion, was signed by Yousef Davoodi, the managing director of MIS, and Bernd Lenzen from ADKL, in Tehran on May 25.

Based on the contract, ADKL will cooperate with MIS in providing the funds, transferring the technology and implementing contracts for the project within the framework of engineering, procurement, construction and finance (EPCF).

This contract was signed during the visit of Garrelt Duin, the state minister for economic affairs and energy of Germany’s North Rhine-Westphalia State to Iran.

Meanwhile, NPC managing director Marzieh Shahdaie said in January that the Islamic Republic has developed up 30 new petrochemical projects to be implemented in the post-sanctions time.