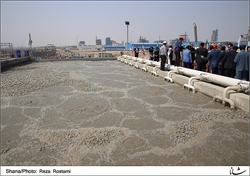 TEHRAN, (Shana) – Kavian, Kordestan and MEG petrochemical facilities are to become operational based on the schedule of the National Petrochemical Company (NPC) in less than one month.

Meanwhile, Minister of Petroleum Bijan Zanganeh has called this year as an exceptional year for Iranian petrochemical industry.

Zanganeh said 5.4 billion dollar investment is needed for operation of the projects this year, which will increase annual production of petrochemical products up to more than five billion dollars.