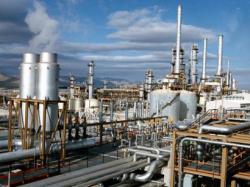 The latest data released by the Iranian Ministry of Industries, Mining and Trade reveals that 236,400 tons of polystyrene produced by Iranian petrochemical units during the 9-month period from March 20, 2017 to Dec. 21, 2017.

The figure is 45 percent more compared to the 9-month period of the preceding year.

Polystyrene is one of the most widely used plastics, the scale of its production being several million tons per year worldwide. It is used for producing disposable plastic cutlery and dinnerware, CD "jewel" cases, license plate frames, plastic model assembly kits, and many other objects where a rigid, economical plastic is needed.

Iranian polymer output is expected to reach 12 million tons by 2022, based on the country’s 6th five-year development plan.

Over 430,200 tons of Polyvinyl chloride (PVC) were produced in Iran in the 9-month period (14.8 percent more year-on-year), followed by Polyethylene terephthalate (392,100 tons, 30.9 percent increase) and polystyrene.

According to the Iranian official data, nominal output capacity of the country’s petrochemical complexes stands at 62 million tons. The nominal production capacity is planned to reach 70 million tons per year by March 2018.