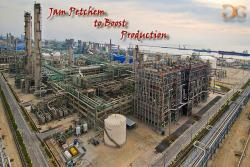 According to the company, implementation of performance testing began in early April, after the dual furnaces of the plant were developed.

Hassan Moeini, deputy managing director of the company, said "Given the importance of ethylene production from gas and propylene, pyrolysis petrol and butadiene from liquid feedstock, this project was implemented with the aim of increasing the gas and liquid feedstock by 15 percent.”

The project brought the feedstock supply capacity of the company from 40 to 46 tons for gas and 50 to 57 tons for liquid feedstock, he said.

According to the official, the project would also generate 8 to 10 million euros in annual revenues for the company.

Jam Petrochemical Complex, with olefin, heavy and light polyethylene, butadiene and butene 1 production units, is one of the largest producers of olefins in the world and a major producer of polymer products in Iran.

According to First Vice President Es'hagh Jahangiri, Iran’s petrochemical production capacity is expected to reach 90 million tons per year from currently 64 mt/y by 2022.