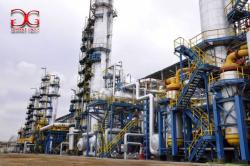 Furthermore, considering the undeniable significance of petrochemical industry in Iran’s resilient economy in the sanctions era, Iranian Oil Ministry and the country’s National Petrochemical Company (NPC) have been taking major steps to facilitate further development of this industry in recent years.

On the sidelines of this year’s exhibition, which is the 13th edition of the event, Tehran Times has conducted an interview with the Director of NPC’s Projects Ali-Mohammad Bosaqzadeh. What follows is a summary of this interview.

According to the official, for the current calendar year (which ends on March 19, 2020), NPC is planning to inaugurate six major projects by the yearend.

The official noted that currently there are 64 petrochemical projects underway across the country with physical progresses between 20 and 99 percent.

“With the completion of the underway projects, the country’s petrochemical output will exceed 100 million tons in the [Iranian calendar] year of 1400 and the industry’s revenues will hit $25 billion,” Bosaqzadeh said.