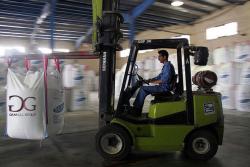 TEHRAN, Nov. 05 (MNA) – The productivity of Tondgouyan Petrochemical Company, the largest supplier of PET in Iran, stood at 103% of its nameplate capacity in the first 7 months of the current calendar year, which began on March 21.

According to the plant’s CEO, Seyed Reza Ghasemi Shahri said on Monday that the company had boosted its output and its output exceeded the plant’s nameplate capacity in the first 7 months of the current calendar year.

According to the National Petrochemical Company (NPC), the company launched a project to enhance the output of its POLY H unit on Monday.

“The project is aimed at removing production bottlenecks and optimizing operation of the unit in terms of quality and quantity,” he said, adding that the project had brought the unit’s production capacity from 132,000 tons per year to 158,000 tons a year.

The official further said that nearly 700,000 man/hours had been spent for completion of the project, adding, “The plant’s output has increased year-on-year despite US sanctions on Iran.”

Shahri said his company had defined over 25 environmental projects which were scheduled to come on stream from next year.

Tondgouyan Petrochemical Plant is the largest supplier of PET (Polyethylene Terephthalate) in Iran.