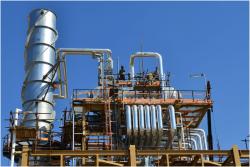 Speaking in a meeting of the surge in production headquarters on Wednesday, Zanganeh noted that the implementation of the new projects is going to bring the country $6 million of revenues every year.

The current Iranian calendar year (began on March 20) is named as the year of “Pick up in Production” by the Leader of Islamic Revolution Seyed Ali Khamenei.

The oil minister said it is high on the ministry’s agenda to complete the South Pars gas field projects.