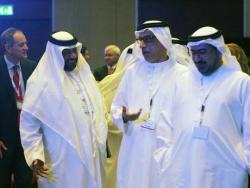 Businesses see opportunities in Iran if sanctions are eased

As the United States and five major world powers hold talks with Iran to ease sanctions over its controversial nuclear enrichment programme, petrochemical companies see opportunities in the Islamic republic to expand their business.

A top executive of the US-based Honeywell UOP, which is involved in delivering technology to the petrochemical industry said that if sanctions are eased, there will be plenty of opportunities for companies.

“If the deal is reached, there would be a lot of potential. We started contingency plans to look at what the opportunities will be and how we would mobilise our sales and market forces. We don’t have any contacts or sales in the country but we know who the players are,” said Michael T Millard, senior vice-president and general manager of catalysts, absorbents and specialities in UOP.

“We have not been involved in Iran for about twenty years and we don’t know much about the industry. A lot of technology in Iran is UOP based.”

Millard was speaking to Gulf News on the sidelines of Abu Dhabi International Downstream conference on Monday.

He said there would be massive investment in the upgrade of refineries once sanctions are removed.

“There hasn’t been any upgrade in the last twenty years. They are very inefficient. All those refineries in Iran were designed by UOP twenty or thirty years ago. They already have existing infrastructure.”

A senior representative of French oil company Total said it would be too early to comment on whether they would be investing in Iran.

“We would consider if sanctions are lifted but it is too early to talk about it,” said Jean Viallefont, vice-president for the Orient zone, refining & petrochemicals at Total.

The group of six world powers including the US, China, France, Germany, the United Kingdom and Russia reached a framework agreement with Iran in Switzerland last month.

They are trying to strike a final deal before June 30 deadline.

An important member of the Organisation of the Petroleum Exporting Counties (Opec), Iran has the world’s fourth-largest proven oil reserves after Saudi Arabia, Venezuela and Canada. The country’s annual production is estimated to be about 2.8 million barrels per day.

According to Iran, it needs $8 billion (Dh29.38 billion) a year of investment for its petrochemical industry to catch up.

Meanwhile, the number of active rigs used for drilling shale oil and gas in the US has fallen from 1,600 to 800 due to the drop in oil prices.

“They didn’t go anywhere. They haven’t [been[ dismantled. If the oil price goes up, the rigs will come on. The other part is if the cost of drilling rate goes down, they will be back on,” Millard said.