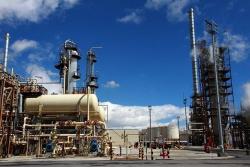 Petrochemical exports over $6bn in 3 months

As a major oil exporter, Iran plans to increase its petrochemical exports to $12 billion this year.

The country has significantly expanded the range and volume of its petrochemical production over the past few years, IRNA reported.

Iran's exports of gas condensates and petrochemicals increased by 40 percent in the first ten months of the last Iranian year (March 21, 2014-January 21, 2015) compared to the corresponding period last year.