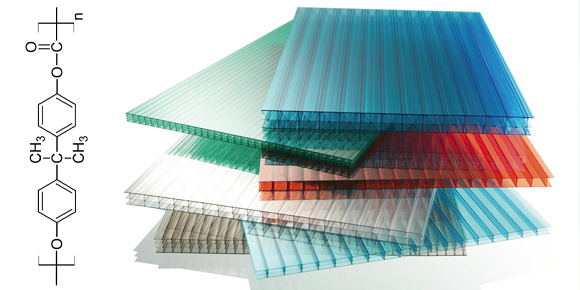 Polycarbonates (PC) are a group of thermoplastic polymers containing carbonate groups in their chemical structures. Polycarbonates used in engineering are strong, tough materials, and some grades are optically transparent. They are easily worked, molded, and thermoformed. Because of these properties, polycarbonates find many applications. Polycarbonates do not have a unique Resin identification code (RIC) and are identified as "Other", 7 on the RIC. Products made from polycarbonate can contain the precursor monomer bisphenol A (BPA). Polycarbonate is also known by a variety of trademarked names, including Lexan, Makrolon, and others.

The main polycarbonate material is produced by the reaction of bisphenol A (BPA) and phosgene COCl
2. The overall reaction can be written as follows:

The first step of the synthesis involves treatment of bisphenol A with sodium hydroxide, which deprotonates the hydroxyl groups of the bisphenol A.

The diphenoxide (Na2(OC6H4)2CMe2) reacts with phosgene to give a chloroformate, which subsequently is attacked by another phenoxide. The net reaction from the diphenoxide is:

In this way, approximately one billion kilograms of polycarbonate is produced annually. Many other diols have been tested in place of bisphenol A, e.g. 1,1-bis(4-hydroxyphenyl)cyclohexane and dihydroxybenzophenone. The cyclohexane is used as a comonomer to suppress crystallisation tendency of the BPA-derived product. Tetrabromobisphenol A is used to enhance fire resistance. Tetramethylcyclobutanediol has been developed as a replacement for BPA.

An alternative route to polycarbonates entails transesterification from BPA and diphenyl carbonate:

The diphenyl carbonate was derived in part from carbon monoxide, this route being greener than the phosgene method.

Polycarbonate is mainly used for electronic applications that capitalize on its collective safety features. Being a good electrical insulator and having heat-resistant and flame-retardant properties, it is used in various products associated with electrical and telecommunications hardware. It can also serve as a dielectric in high-stability capacitors. However, commercial manufacture of polycarbonate capacitors mostly stopped after sole manufacturer Bayer AG stopped making capacitor-grade polycarbonate film at the end of year 2000. 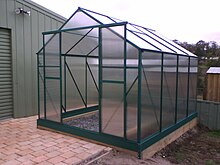 Polycarbonate sheeting in a greenhouse

The second largest consumer of polycarbonates is the construction industry, e.g. for domelights, flat or curved glazing, andsound walls. 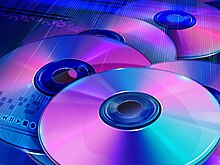 A major application of polycarbonate is the production of Compact Discs, DVDs, and Blu-ray Discs. These discs are produced by injection molding polycarbonate into a mold cavity that has on one side a metal stamper containing a negative image of the disc data, while the other mold side is a mirrored surface. Typical products of sheet/film production include applications in advertisement (signs, displays, poster protection).

In the automotive industry, injection-molded polycarbonate can produce very smooth surfaces that make it well-suited for sputter deposition or evaporation deposition of aluminium without the need for a base-coat. Decorative bezels and optical reflectors are commonly made of polycarbonate. Due to its low weight and high impact resistance, polycarbonate is the dominant material for making automotive headlamp lenses. However, automotive headlamps require outer surface coatings because of its low scratch resistance and susceptibility to ultra violet degradation (yellowing). The use of polycarbonate in automotive applications is limited to low stress applications. Stress from fasteners, plastic welding and molding render polycarbonate susceptible to stress corrosion cracking when it comes in contact with certain accelerants such as salt water and plastisol.

It can be laminated to make bullet-proof "glass", although "bullet-resistant" is more accurate for the thinner windows, such as are used in bullet-resistant windows in automobiles. The thicker barriers of transparent plastic used in teller's windows and barriers in banks are also polycarbonate.

So-called "theft-proof" large plastic packaging for smaller items, which cannot be opened by hand, is uniformly made from polycarbonate.

The cockpit canopy of the Lockheed Martin F-22 Raptor jet fighter is made from a piece of high optical quality polycarbonate, and is the largest piece of its type formed in the world.

Polycarbonate, being a versatile material with attractive processing and physical properties, has attracted myriad smaller applications. The use of injection molded drinking bottles, glasses and food containers is common, but the use of BPA in the manufacture of polycarbonate has stirred serious controversy (see Potential hazards in food contact applications), leading to development and use of "BPA-free" plastics in various formulations. 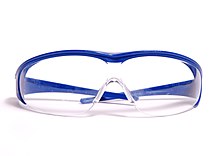 Polycarbonate is commonly used in eye protection, as well as in other projectile-resistant viewing and lighting applications that would normally indicate the use of glass, but require much higher impact-resistance. Polycarbonate lenses also protect the eye from UV light. Many kinds of lenses are manufactured from polycarbonate, including automotive headlamp lenses, lighting lenses, sunglass/eyeglasslenses, swimming goggles and SCUBA masks, and safety glasses/goggles/visors including visors in sporting helmets/masks and police riot gear. Windscreens in small motorized vehicles are commonly made of polycarbonate, such as for motorcycles, ATVs, golf carts, and small planes and helicopters.

The light weight of polycarbonate as opposed to glass has led to development of electronic display screens that replace glass with polycarbonate, for use in mobile and portable devices. Such displays include newer e-ink and some LCD screens, though CRT, plasma screen and other LCD technologies generally still require glass for its higher melting temperature and its ability to be etched in finer detail.

As more and more governments are restricting the use of glass in pubs and clubs due to the increased incidence of glassings, polycarbonate glasses are becoming popular for serving alcohol because of their strength, durability, and glass-like feel.

Standard Polycarbonate resins are not suitable for long term exposure to UV radiation. To overcome this the primary resin can have UV Stabilisers added. These grades are sold as UV Stabilised Polycarbonate to Injection Moulding and Extrusion companies. Other applications including Polycarbonate sheet may have the anti-UV layer added as a special coating or a coextrusion for enhanced weathering resistance.

Polycarbonate is also used as a printing substrate for nameplate and other forms of industrial grade under printed products. The polycarbonate provides a barrier to wear, the elements, and fading.

Many polycarbonate grades are used in medical applications and comply with both ISO 10993-1 and USP Class VI standards (occasionally referred to as PC-ISO). Class VI is the most stringent of the six USP ratings. These grades can be sterilized using steam at 120 °C, gamma radiation, or by the ethylene oxide (EtO) method. However, scientific research indicates possible problems with biocompatibility. Dow Chemical strictly limits all its plastics with regard to medical applications.