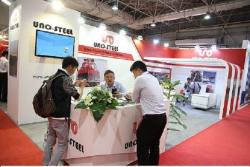 Hassan Mortaji, who is in charge of organizing the event, told reporters that the exhibition, dubbed 'Iran Project on Exports', is to be attended by the top Iranian companies, producers, exporters and activists in the fields of oil, gas and petrochemical and transportation, from November 11-13.

Pointing to signing of five memorandams of understanding between Tehran and Baku last year, he added that the two countries are determined to bolster their economic cooperation.

Putting the volume of Iran exports to Baku at $520 million last year, Mortaji said that the figure is projected to hit $2 billion in the coming year.

The exhibition is held to promote exports and services and prepare the ground for commercial exchanges between Iran and Azerbaijan Republic, he said.

After Turkmenistan, Azerbaijan Republic was the second market to the Iranian goods in 2014 among Commonwealth of Independent States (CIS), Mortaji added.