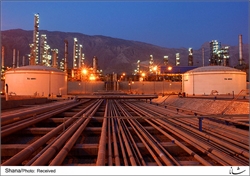 TEHRAN Oct. 18 (Shana) – Iran exported 1.5 million tons of petrochemical products worth 802 million dollars in the month of Shahrivar (August 23 – September 22) despite of major restoration works underway in its units.

The monthly production totaled 4.078 million tons out of the biannual 23.7 million tons during the first half of the current year (March 21 – September 23).

Unlike previous years’ gas feed decline in cold season due to peak consumption which led to production decline, he added, this year it is expected that launching new phases in South Pars filed can meet the demands of the industrial units.

Ministry of Petroleum will organize two conferences to introduce Iran’s new oil contracts in Tehran and London on November 21-22 and February 22-24 respectively.

The government of Iran supports development of the petrochemical industry in the bid to encourage economic growth and lead the country out of recession, said minister of industry, mines, and trade.

Iran’s petrochemical industry has the advantage of massive hydrocarbon reservoirs in the country which serve as the gas and liquid feed of the industry.

Its products are also highly value added and help the country to take distance with crude sale of hydrocarbon material.