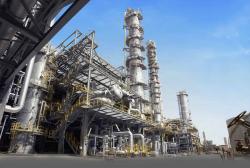 TEHRAN – Iran’s petrochemical sector is negotiating with a number of countries including Spain and the Commonwealth of Independent States (CIS)to open sales offices over there, according to an Iranian oil official.

Currently, there are 67 semi-finished projects underway that their completion would raise the annual production of petrochemicals to 120 million tons in the country, the official stated.

Easing sanction on Iran is driving up petrochemical sales. As part of the nuclear deal reached with P5+1 group of countries on July, sanctions on 14 major Iranian petrochemical companies were suspended.

Based on the official statistics, Iran has a capacity to produce 60 million tons of petrochemicals per year.

Also, on August 15, Sharifi Niknafs said the value of Iran’s petrochemical exports is forecast to rise by 20-25 percent during 1-1.5 year after the West-led sanctions are lifted from the country.