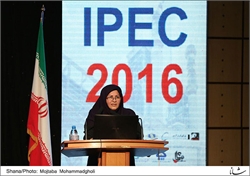 Shahdaie made the remark in an address to the 2nd Iranian Petroleum and Energy Club Congress & Exhibition (IEPC 2016) in Tehran on Tuesday.

She said Iran is the second most important country in the region economically and in terms of population.

She added that huge oil and gas reserves are among advantages of investment in Iran.

She went on to refer to eight percent economic growth target by end of the Sixth Five-Year Economic Development Plan and said to this end, Iranian oil industry can play an effective role.

She announced, "Our target is more than 65 million tons/year petrochemical exports in 2020."

She also referred to nine billion dollars value-added of the petrochemical industry in 2015 and said economic diversity, qualitative manpower, huge domestic market, Iran's geopolitical condition and investment incentives like 20-year tax exemption for investment in the special economic zones are among advantages of investment in Iran.

Then she said Iranian Ministry of Petroleum and National Petrochemical Company welcomed activity of Iranian and international companies in the petrochemical sector.

The official said partnership with international companies, feedstock diversity and investing companies' attention to the collection of value chain and not just part of it are among criteria taken into consideration while prioritizing the volunteers.

She said 50 petrochemical development projects have been defined, needing more than 30 billion dollars to be implemented.

Once the projects are implemented, more than 40 million tons will be added to the country's petrochemical production capacity, she concluded.