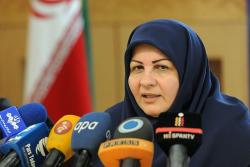 EHRAN, (Shana) -- The third panel held on the second day of the third annual Congress of the Iran Petroleum and Energy Club (IPEC) in Tehran was on petrochemical industry.

The panel was presided over by Marzieh Shahdaei, who is CEO of Iran's National Petrochemical Company (NPC).

She said that petrochemical industry had a 35% share in Iran's non-oil exports and a 39% share in the country's industrial exports. She added that these percentages had significantly increased from the previous years.

She said that, by the end of March 2017, 50 petrochemical plants with a production capacity of 62 million tons were operating. During the last calendar year to March, 21 million tons of petrochemicals, worth $10 billion, was exported.

Shahdaei said there were 56 petrochemical projects in Iran, whose startup would add 55 million tons to the current production capacity.

She said some petrochemical projects had been slow in progress due to insufficient technical knowhow and financial shortages. "We hope that some obstacles blocking the progress of these projects would be removed. According to plans, future projects would be based on using gas and hydrocarbon compounds."

She said that one of objectives pursued in the 6th Five-Year Economic Development Plan would be to produce propylene through converting natural gas to olefin and also converting propane to propylene.

In the current calendar year, she added, operation of five more projects with $3 billion investment would add 10 million tons to the petrochemical industry production capacity. She expressed hope that 1,700 new jobs would be created.

"In its approach the petrochemical industry has focused on using such advantages as access to feedstock, realizing the objectives of resilient economy and indigenizing modern technologies," said Shahdaei.