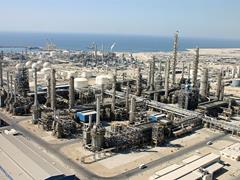 TEHRAN (Shana) -- Iran’s petrochemical facilities processed as many as 13.2 million metric tons of petrochemical products over the first three months of the current Iranian calendar year which began on March 21.

According to the Director of Production Control at the National Petrochemical Company (NPC), the plants operated at 77% of their nameplate capacity during the first quarter of the fiscal year, NIPNA reported.

He also added that 1.52 mt of urea fertilizer was also processed during the period, adding petrochemical plants like Pardis, Arvand, Kavian and Amir Kabir ramped up their production this year compared to the same period last year.

The official also said that given the inauguration of new projects, NPC expected a 17% growth in the country’s petrochemical production capacity this year.

He further noted that stabilization of feedstock supply from South Pars gas field was key in realization of this year’s plans in the petrochemical sector.