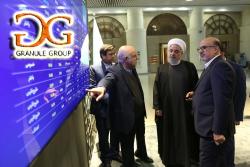 TEHRAN – President Hassan Rouhani stressed the significant role of Iran’s petrochemical industry in the country’s economy in the face of U.S. sanctions, saying that it is at the forefront of the country’s non-oil exports, IRNA reported.

Rouhani made the remarks in a meeting attended by the officials and managers of the industry, including the Oil Minister Bijan Namdar Zanganeh, on the occasion of the National Petrochemical Industry Day in Tehran on Monday.

“According to the governor of the central bank, 20 percent of the country's foreign currency needs and more than 50 percent of the injections to the NIMA system [Iran's domestic Forex Management Integrated System] are provided by the petrochemical industry,” Rouhani added.

He further mentioned the oil ministry’s programs for the development of the petrochemical industry and noted: “According to statistics, by the end of the second leap, our petrochemical production capacity is projected to reach 100 million tons per year.”